Cambodia is a wonderful country that lends itself very well for the most stunning travel. More and more people realise that Cambodia has much more to offer than the famous Temples of Angkor alone, although visiting the eight wonder of the world does give Cambodia its edge. Cambodia is blessed with golden undeveloped beaches, dazzling rice paddies, unspoilt rural life, timeless landscapes, endless forests and beautiful old colonial cities like Phnom Penh, Battambang, Kampot and Kep, all of which have a very relaxing atmosphere. It is also the gentle, polite and charming personality of the Khmer people which makes Cambodia such a memorable destination.

Further down the page: Read about our company * Travel facts Cambodia. There is also a map of our country and our latest Cambodia travel news.

This email address is being protected from spambots. You need JavaScript enabled to view it.

This email address is being protected from spambots. You need JavaScript enabled to view it. 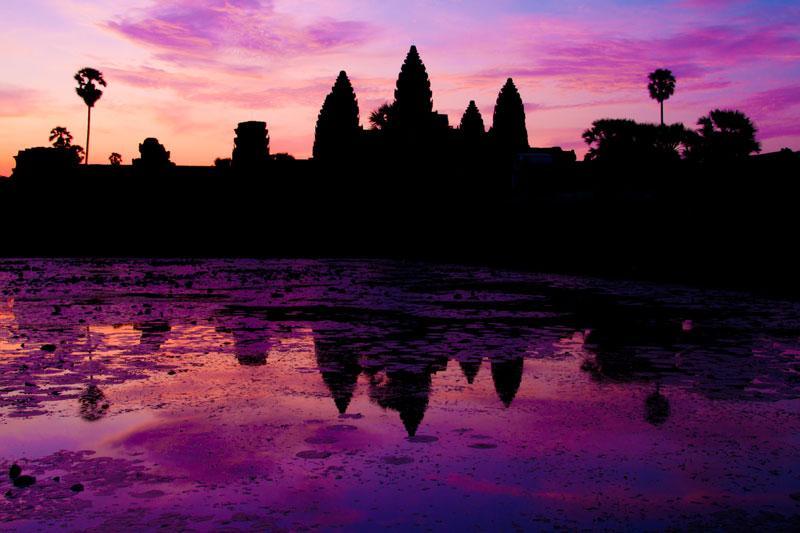 Phnom Penh
Capital of Cambodia and former pearl of Asia, this city is filled with colonial charm. Phnom Penh's history begins with the Lady Penh who discovered five Buddha images concealed in a tree, had a pagoda named Wat Phnom Don Penh built on the same spot. The city was founded nearly a century later, taking its name from the pagoda, that became the capital in 1866.
Following its recent traumatic history, parks, gardens and elegant villas are now being restored, tree-lined boulevards still reflect the elegance of the city's French colonial past, and camera-clicking tourists sit in pedicabs ("cyclos") which weave their way leisurely through the increasing numbers of cars and motorcycles. This pleasant scene, coupled with the current bustle of optimistic commerce, belies the chilling fact that the city stood abandoned and empty from 1975-1979 during the forced evacuation by the detested Khmer Rouge.

Siep Reap
Siem Reap is the base for exploring the fabled temples of Angkor, the ancient capital of the Khmer Empire. Designated a UNESCO World Heritage site, Angkor is quite simply one of the wonders of the oriental world. This incredible temple complex, which lay forgotten beneath the jungle for centuries, dates back to the 12th century and represents one of the world's most remarkable architectural achievements. Spread over several hundred square kilometres, the former capital of the powerful Khmer civilisation, Angkor is truly spectacular with temples, monument and beautiful sculptures a testament to the extraordinary craftsmanship of the Khmers.
Angkor cannot be "done in a day." While most the main temples are clustered within a 10 kilometre radius, many tourists who visit for 3 days (considered the minimum time) often say they would like to stay for a week. Such is the spendour and the allure of the place.

Sihanoukville
Located 230 kilometres southwest of the capital city Phnom Penh, Sihanoukville has beautiful pristine undeveloped beaches. Visitors can enjoy the nearby Kbal Chhay waterfalls, the Bokor Hills and the Ream National Park with its stretches of coast and mangrove forests. From Victory Beach, about three or four km away, boats can be hired to picnic on uninhabited islands where there is excellent snorkeling. There is a fast boat connection to Koh Kong province, and to Trat in Thailand, and there is an international border checkpoint.

Preah Vihear
One of the most spectacular sights in Cambodia, Prasat Preah Vihear is set in a stunning location at the top of a 550metre (1500ft) cliff right on the Thai Border. Preah Vihear achieved notoriety as it was the the stage for the final surrender of the Khmer Rouge in 1998. The area is still littered with land mines and shell holes. There is an old field gun still up there as a reminder of the war and until recently there was the remains of a helicopter which crashed here at the time of the surrender. (the Crashed helicopter is now at the war museum in Siem Reap)

Siem Reap is the capital city of Siem Reap Province in northwestern Cambodia. It is a popular resort town and a gateway to the Angkor region.

Siem Reap has colonial and Chinese-style architecture in the Old French Quarter, and around the Old Market. In the city, there are museums, traditional Apsara dance performances, a Cambodian cultural village, souvenir and handycraft shops, silk farms, rice-paddies in the countryside, fishing villages and a bird sanctuary near the Tonle Sap Lake.

This is much owed to its proximity to the Angkor temples, the most popular tourist attraction in Cambodia

With more than 20 years of experience, we are one of the leading DMCs in Cambodia. We have an office in Siem Reap, and also have offices in Vietnam, Myanmar, Korea and Thailand.

We would love to assist you with your travel to Cambodia.